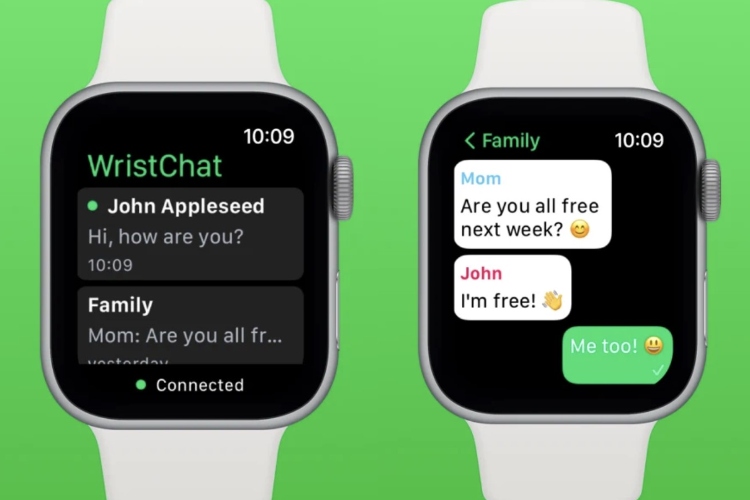 Although WhatsApp is one of the most popular messaging apps in the market, the app is only available on iPhone and Mac platforms in Apple’s ecosystem. While the company may soon be developing a highly anticipated iPad app, an independent iOS developer has brought WhatsApp to the Apple Watch with a new WristChat app. Let’s take a look at the details below.

Created by a developer named Adam Foot, the WristChat app is a nifty Apple Watch app that allows users to access, read, and even send WhatsApp messages to their contacts from their wrists. Foot used SwiftUI to develop the app’s user interface on Apple Watch and it uses the WhatsApp Web API to access users’ messages.

During installation, users can scan the provided QR code using the WhatsApp app on their phone to set it up on their Apple Watch. After setup, the WristChat app will show recent messages, much like the Apple Messages app on watchOS. Users can also customize various elements of the app, including the color of message bubbles. There is also an option to hide/show user profile picturesand the app also has built-in support for haptic feedback.

Now, although users can send a new message to any of their existing chats, they can’t start a new conversation from the WristChat app. Regarding the input method, users can use the dictation and Scribble functions of the Apple Watch to type the messages. Otherwise, they can also use the WristBoard app, which is a full-fledged keyboard app for the Apple Watch, for writing messages. With the WristBoard app, users will also get features like autocorrect and word suggestions on their Apple Watch.

So, if you want to message your friends on WhatsApp from your Apple Watch, you can check out the WristChat and WristBoard apps on the App Store. the Wrist Chat app is priced at $2.99while the WristBoard app comes for $2.99. However, you can get the Watch Keyboard for WhatsApp Bundle, including both apps for a discounted price of $3.99.