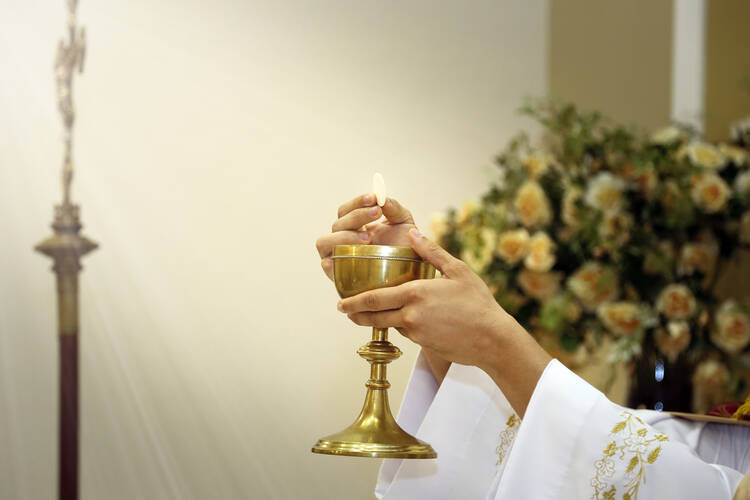 Editor’s Note: America received dozens of responses to Jim McDermott, SJ’s interview with Senator Dick Durbin, Illinois Democrat, and to Gloria Purvis’ interview with Archbishop Salvatore Cordileone of San Francisco, both of which deal with the issue of the admission to Communion of Catholic politicians who support legal abortion. These answers can be found by scrolling to the end of the two articles linked above.

In an interview published by America on November 8, Senator Dick Durbin comments on his disagreements with church teaching on abortion and other issues. He also discusses the context in which he was asked not to attend Communion in the Diocese of Springfield, Illinois. In his remarks, the senator ignores the motives of the latter and sows confusion as to the former. Both questions require correction.

First, we would like to recognize Senator Durbin’s long-standing dedication to public service and his commitment to advancing many policies and programs that recognize the disadvantaged and marginalized. In these areas, we are grateful for his contributions to causes that are of great importance to the church and its faithful. However, Senator Durbin’s comments in America’s interview need to be corrected, out of concern for his soul and out of concern for the confusion and scandal his words and actions present to the church’s faithful.

Senator Durbin suggests that many faithful Catholics agree with his position on abortion, and he claims he is being unfairly singled out for expressing his opinion publicly. It’s wrong. In fact, it was thanks to the Senator’s concrete and consistent actions to promote abortion in our country that, as his pastor, Bishop Kevin Vann (then Monsignor Vann) —when a reporter asked him how he would react. if Senator Durbin showed up for Holy Communion – expressed that he would be reluctant to give Holy Communion to Senator Durbin. Archbishop George Lucas, then Bishop of the Diocese of Springfield in Illinois, publicly supported this position. Subsequently, Bishop Thomas John Paprocki spoke directly with Senator Durbin and clarified that unless the Senator ceases his promotion of abortion, the position held by Father Vann and Archbishop Lucas should be maintained. Senator Durbin affirmed his continued commitment to promoting legal abortion and has since publicly persisted in actions against God’s law in the serious matter of the deaths of innocent people.

In the section of Church law governing the Eucharist, Canon 915 Code of Canon Law prescribes that “persons who persistently persevere in manifest grave sin should not be admitted to Holy Communion”. The public support of Senator Durbin and the promotion of policies – clear and concrete actions, not mere opinions – that advance abortion is a “manifest grave sin”. He stubbornly persevered in these actions despite repeated corrections. According to church law, he should not be admitted to Holy Communion, and only Senator Durbin has the power to change this reality.

Senator Durbin suggests that the standard for a worthy reception of the Eucharist is a “well-formed conscience”. This is also wrong. Rationalizing one’s actions does not equate to a well-formed conscience, and one’s own self-assessment does not erase the objective reality of being outside of fellowship with God and the Church. Pope Francis recently affirmed this reality. Noting that there is no theological ambiguity when it comes to pro-abortion politicians, the Holy Father said, “Those people who are not in the community cannot go to Communion because they are out of the community. the community. It is not a punishment: communion is linked to the community.

Senator Durbin has been fully briefed on this reality, but he persists in actively promoting abortion. For example, on September 1 of this year, Senator Durbin posted a Twitter article touting his support for “#ActforAbortionAccess” as “a crucial step in ensuring that people across the United States have access to a safe and secure abortion. legal ”. The Senator’s active support and promotion of abortion is clear, consistent and unambiguous. Its stubborn persistence in promoting the grave sin of abortion is an objective reality and not a subjective interpretation.

Echoing the words of the Holy Father, as shepherds of souls, we must make it clear that Senator Durbin’s continued promotion of pro-abortion policies objectively places him outside of fellowship with the church, and we offer this additional correction. in the hope of his conversion and his return. Saint Paul warns against the danger of such an unworthy reception, writing: “For whoever eats and drinks without discerning the body eats and drinks judgment on himself” (1 Cor 11:29). Asking Senator Durbin not to attend Holy Communion reflects the next pastoral step needed after dialogue has failed to facilitate conversion, and is a step intended to bring about repentance and a restoration of fellowship. It is not a punishment. It is a pastoral measure whose ultimate goal is salvation and communion with Christ.

Finally, the senator rightly recognizes the Church’s concern for immigration policies that promote human dignity, but he is wrong to suggest that abortion and immigration are morally equivalent. They are not. Immigration policies involve many prudential decisions and various means of promoting charity and justice. Abortion, on the other hand, is an inherent evil that is never allowed. By suggesting their moral equivalence, the senator suggests that the church should celebrate Catholic leaders whose policies align with the church’s concerns for immigrants while turning a blind eye to their promotion of other policies that lead to murder of millions of innocent lives. This approach is inconsistent and unfair. If the dignity of the helpless in the womb is not respected, there can be no justice and no human rights.

As our church in this country prepares for a Eucharistic revival, we will seek to grow in understanding and respect for the real presence of Christ in the Eucharist. We hope that the Senator will experience a renewal of spirit and a conversion of heart in this grave matter so that he may again be admitted to Holy Communion and receive the many graces that accompany his worthy reception.

At a minimum, we hope that he will more honestly recognize the reality of his disagreement with the truths of our faith and refrain from misleading other members of the faithful. We remain open to dialogue with Senator Durbin on these issues and welcome this discussion.