Markets are generally pretty quiet today, with major pairs and crossovers trading within yesterday’s range, as well as within last week’s range. For now, the dollar is the strongest, followed by the pound and then the euro. The Australian and New Zealand dollars are the weakest. The yen and the Swiss franc are mixed with the Canadian.

Technically, the dollar’s rally this week isn’t making much progress so far. Even Gold’s recoil is relatively small. As long as 1754.13 support holds, upside from 1680.83 still favors recovery to 1807.66. Nonetheless, a firm break of 1754.13 will likely bring a reversal to retest the 1680.83 low. This could be accompanied by a stronger rise in the greenback. 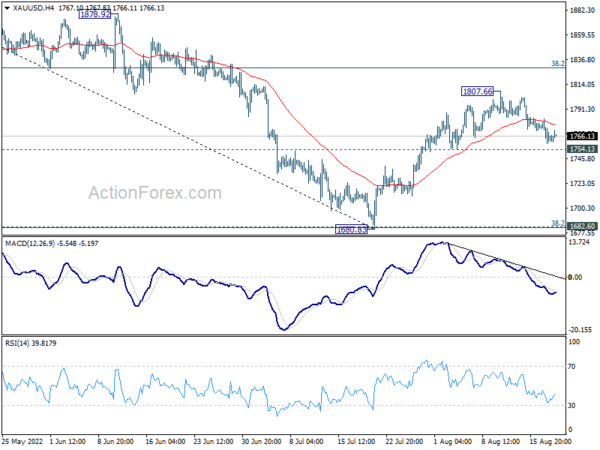 US initial jobless claims fell to 250,000, below expectations

ECB Schnabel: our concerns have not subsided after July’s 50 basis point hike

Isabel Schnabel, a member of the ECB’s executive board, said in an interview that there was “a strong indication that growth will slow down.” It would not rule out a technical recession in the euro zone, “especially if energy supplies from Russia are further disrupted”. Downside risks have also increased due to “additional supply-side shocks, caused by droughts or low water levels in major rivers.”

Regarding inflation, she said rising inflation rates are a “widespread development.” “Inflationary pressures are likely to be with us for some time; they won’t go away quickly,” she added. “I would not rule out that in the short term, inflation continues to rise…. it is very difficult to predict when inflation will peak.

Regarding the September meeting, Schnabel said “the concerns we had in July have not been alleviated.” In July, the ECB raised its interest rates by 50 basis points. “At the moment, I don’t think that perspective has fundamentally changed,” she added.

RBNZ Orr: monetary policy has been too accommodative for a while

RBNZ Governor Adrian Orr told a parliamentary committee: “Our underlying inflation is too high and that suggests that at some point monetary policy has been too accommodative for a while.”

“I have already apologized for the current level of inflation. I have already said that the Reserve Bank is party to this,” he added.

However, “the worst mistake we could make would be to fight deflation, unnecessary unemployment and economic collapse,” he said. “We ended up with the best problem – but it’s a problem – which is inflation, the underlying 4-6% inflation that we have to put back in the bottle.”

The intraday bias on USD/JPY remains neutral at this point. Overall, the corrective pattern from 139.37 will extend further. On the upside above 135.57 rebound will resume to retest 139.37 high. But a decisive break is not expected there this time. On the downside below 131.72 the fall will resume from 139.37 support at 130.38. 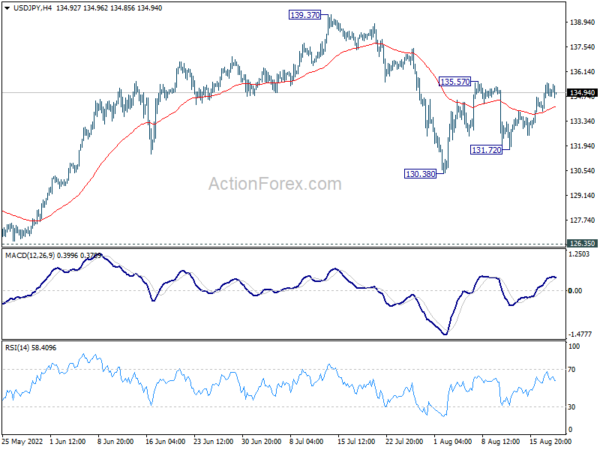 Overall, the fall from the medium-term high of 139.37 is seen as correcting the overall uptrend from 101.18 (2020 low). While a deeper decline cannot be ruled out, the outlook will remain bullish as long as the 55-week EMA (now at 122.70) holds. The long-term uptrend should resume at 139.37 at a later stage after the correction is over. 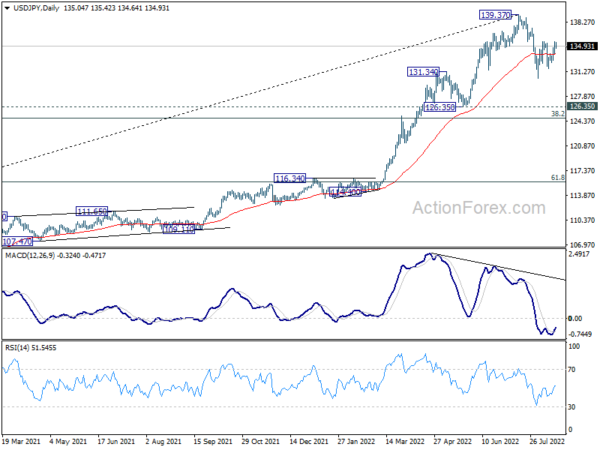